Let’s learn how control plane is populated and how data plane work in HSRP when host in two different network wants to communicates with each other. Let’s see the below example to understand how it works. 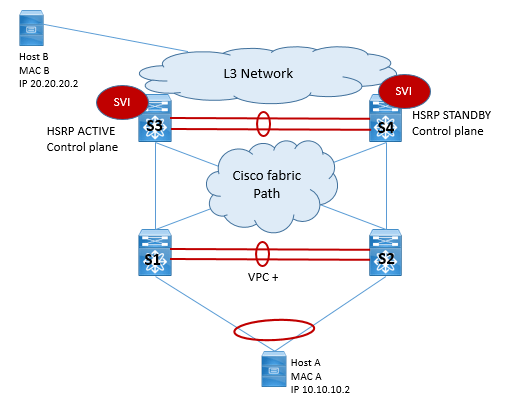 In order to achieve HSRP Active and Standby, HSRP hello packets are sent on VPC+ peer core ports with Source MAC HSRP VMAC. These HSRP VMAC is also learned by fabricpath access switches against the VPC+ virtual switch ID. When a frame is sent to HSRP’s VMAC from the Fabric Path edge switch, the MAC address lookup table returns the vPC+ virtual switch-ID (SID) as the destination switch. When a frame is sent to HSRP VMAC from a host device connecting to a vPC+ port channel, the traffic can take any of the physical links in port channel and can arrive on either of the vPC+ peer switches.