In a region, multiple VPC can be created and they are logically isolated even if they share IP address Space. Once any address space is assigned it cannot be changes after VPC is created.

There are two types of Network Platform available within AWS.

EC2-Classic was originally launched with a single, flat network shared between another AWS customers. 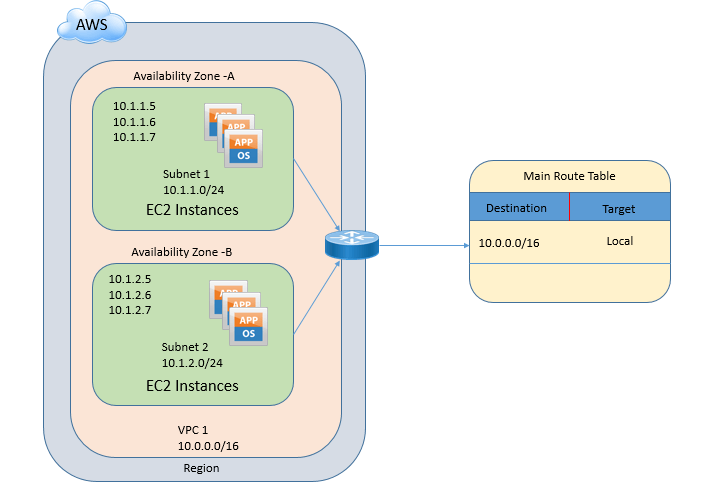 An amazon VPC consists of the following components

Subnets are the IP address ranges which is assigned to EC2 Instances, Amazon RDS databases, and other AWS resources.

Associated to routing table which directs the subnets traffic to VPC IGW. Instance which are running in a public network, they will be able to access internet by default and these instances can also be made to public internet by assigning Public or Elastic IP to them.

Public IP assigned to Instance is sourced from Public IP Subnet pools and are attached to instance randomly, whenever instance gets started.

Associated to routing table which does not directs the subnets traffic to VPC IGW.

Instance running on private network can communicate with all instances in all subnet that exists in that VPC. We can control traffic between all subnets through VPC network access control list and defines rules for communication.

Private Subnet can also be connect to other network via NAT gateway for outbound traffic , as well as VPN gateway or Direct Connection , that allow private subnet to communicate without on-premise systems.

Associated to routing table which directs the subnets traffic to VPG and does not have route to IGW.

Route table is collection of destination routes, which is looked up by Network device to route traffic from one destination to another. Route table can be modified and we can add your own custom routes. Route table can also be used to specify which subnets are public, private and VPN-only. Each route table contains a default route which is also called as local routes.