In this section we will understand the VPC best practices, which is being followed by Cisco .

To configure vPC in Datacenter, following are the steps described. We will take these steps one by one and will discuss all best practices associated to it.

A vPC domain contains maximum two nexus switch which are grouped together to participates in vPC. A vPC domain can be configured by entering following commands in nexus CLI:  vpc domain

The Id is identifier and should be same on both vPC peer devices.

Following are the steps to configure vPC domain as a part of VPC best practices:

Peer-link can be configured by following system command:

Having same vPC system MAC address on both peer switch, makes the access-device which is going to attached to vpc with both peer-switch, access device will see the both different switch as a same logical switch through which it is going to connect via vPC and will form the Port-channel successfully.

There is also another MAC called vPC Local System-MAC which is burn in MAC address of switch and this MAC is used for all another communication in Layer -2 domain like STP etc. This Local system MAC address is derived from system or VDC mac address.

There is also another important feature which should be configured inside vPC domain is vPC role. Let’s understand this.

When we configure vPC there are two defined vPC role: Primary and secondary. As per VPC best practices the Peer-switch which has lower priority will assume role primary and another will be secondary and if the priority are equal then vPC system Local MAC address will comes in to picture.

We can configure priority manually:

The vPC role defines which one among the two peer-switch will be processing the BPDU and respond to the ARP requests.

These vPC Primary and secondary is also very much used in case of vPC Peer-link failure which we will discuss in detail later in another section. But for overview, whenever peer-link goes down then on secondary peer switch, vPC shuts the vPC member ports and in addition to all SVI configured on that secondary peer- switch associated to vPC VLAN. 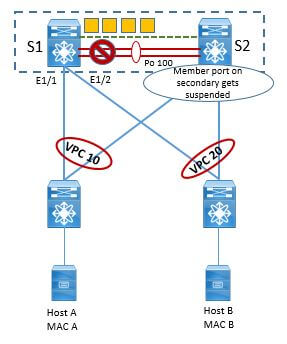