RSTP running on each VLAN has one Root Bridge and the selection criteria of Root Bridge, Root Port and designated port is same as traditional STP. Here we are not going to recalculate these ports as we assume that readers are well aware of these concepts in traditional Ethernet switch segments.

In RSTP, each designated ports sends out BPDU every 2 sec and if these BDDU are missed consecutive three times or if MAX age expires, the port immediately flushes all protocol information stored on it. Due to this short time BPDU loss allows quick failure detection and RSTP starts re-convergence. The BPDU version of RSTP is version 2 which means it can easily detects the connected legacy 802.1D Bridges.

Following are the ports used in RSTP:

Edge Ports: these ports transition immediately to forwarding states and is configured to those ports where end host are connected. These ports does not generate the TCN when topology changes.

Root Ports: It has shortest distance or cost to root bridge and when a new Root port is selected it blocks the old root ports and immediately transition new root port to forwarding state.

Point-to-Point Links: If a new port connected and becomes the DP port then it uses the proposal and agreement handshake to ensure loop free topology.

RSTP gets the rapid transition to forwarding states only on edge ports and Point to point link and only designated ports and root port generates TCN BPDU when they don’t receives the three consecutive BPDU from directly connected neighbor or after expiration of MAX age timer. And these ports send the configuration BPDU with TC bit set and these TCN BPDU is sent out all DP or Root port to reach to Root Bridge. The Port will send the BPDU with TC bit set as long as TC while timer runs on that port which is Hello time + 1 Sec.

When RSTP detects a topology change the RSTP takes the following action:

Rapid PVST+ and 802.1w uses all six bits of the flag byte for following:

In order to understand the Proposal and agreement handshake, refer the below topology: 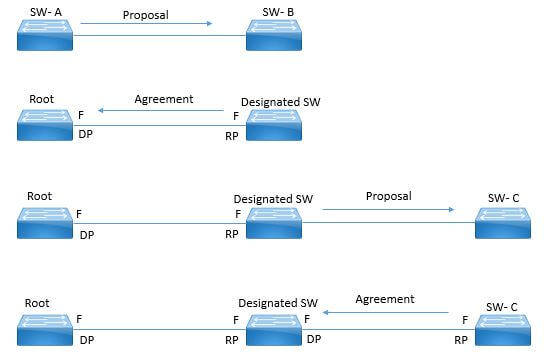