Generation: 2: Models include 5500 switches and are currently being deployed as datacenter access layer switches along with Cisco Fex Extender which we will be discussing a little later.

These has following capability:

Below diagram will provide some highlights about first and second generation Datacenter access switches: 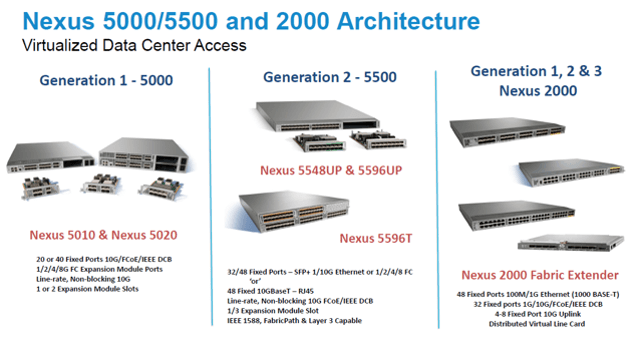 Out of above model, Nexus 5548 is end of sale now, the switch which has UP attached along with model number is called as unified ports that mean its can support both Ethernet as well as Storage (FC) and FCOE traffic.

Models includes in this portfolios are:

Below is the hardware description of Nexus 5500 switch for Nexus 5548P, 5548UP and 5596UP models. The below figure its self-defines the hardware capabilities of the Nexus 5500 Series switch and each switch has one or three expansion slots which is used to install additional expansion modules if more number of ports are required  in future.

Below is the pictorial view of the types of Expansion slots available for Nexus 5500 Switch Models:

Below is the small description of Nexus 5500 hardware Overview: 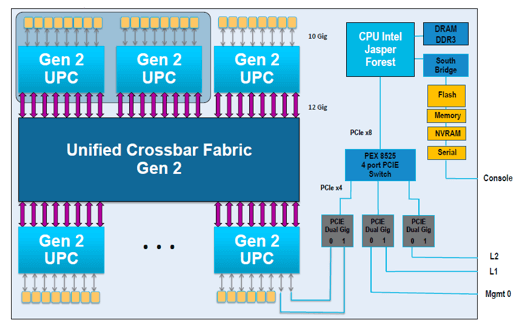 Nexus 5000/5500 uses the Distributed Forwarding Architecture, where UPC represents the Unified port Controller which connects 8 physical ports and provides the 8 virtual Queue per port for QOS and queuing purpose. All port to port traffic passes through this UPC only. Finally this UPC is connected to Crossbar fabric which inter connects all UPC in the Nexus 5500 or 5000 series switches.