What causes VPC+ in to picture, even we have VPC already in place on Nexus 7000 or Nexus 5000 series switches. 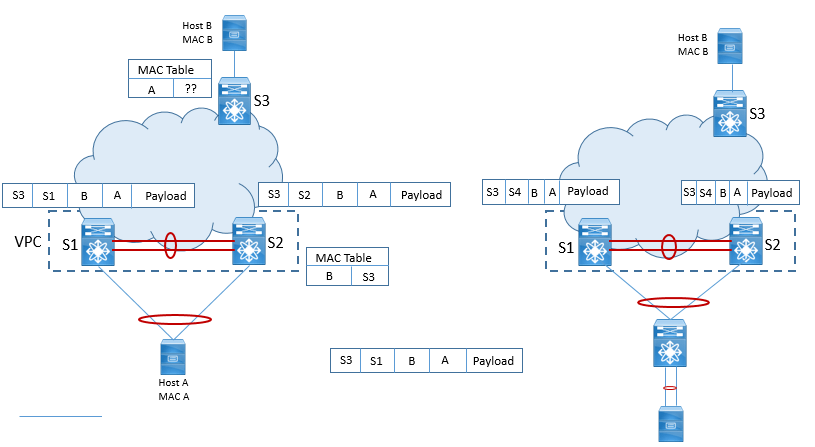 Now in left Figure, VPC is configured and Host A is sending the traffic, to Host B which is connected to Switch S3. Now for one flow it can take the S1 to reach to Host B, when this happens the following will be the Header structure when Ethernet frame will get encapsulated to fabric Path frame.

Now let’s suppose Host A started another type of traffic, and due to Port-channel hash algo, it took S2 to reach S3, in this Fabric Path frame will be like this:

Now On S3, S3 will make the MAC table but it will confuse that same MAC A can be reached by two S1 and S2 switch and on to which switch it should send the reply? S1 or S2, and this can also cause MAC flapp issue.

This Problem was solved by VPC+, in which we configured another virtual Switch ID under VPC domain, So in S1 and S2 will be seen as single switch let’s say S4 to all another switch in fabric path domain. See right side of the same figure.

Now S3 can easily reply to Host A and can send the packet to S4 (which is S1 or S2) which further can be forwarded to Host A.