vPC systems provide various advance concepts which can be used to enhance the vPC system. Following are the vPC enhancement we are going to study one by one:

As we are aware that, In HSRP/VRRP systems, Both Nexus switch can route packet to HSRP Virtual VMAC and all upstream traffic will be load balanced through vPC Port-channel in access switches and Access switch sends the traffic to HSRP VMAC of SVI for Routing.

But in some cases like NAS servers, Servers with particular teaming technique might not send the any ARP request to discover gateway MAC address rather they use the MAC address received on the original request to build its response and NAS would reply to client request   and these reply will be directed to SVI MAC address and not to HSRP VMAC address.

Due to this it can create the undesired traffic flow in vPC. Let’s understand this by below example: 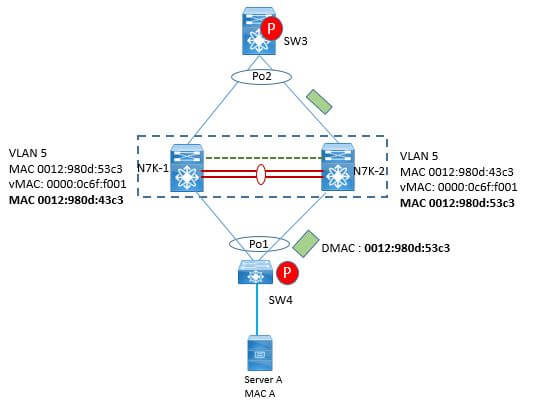 In above figure let’s say,

This issue can be solved easily by Peer-gateway command under vPC Domain. If both vPC peer is configured with this command each of them can route packet out to vPC port because  VLAN 5 SVI MAC of N7K1 will also be present on N&K2 and vice Versa , as shown in above figure.