A vEdge router can also be used as NAT device on both transport and service side of network. Let’s see and understand how vEdge routers work if we configure NAT on transport or on Service side individually.

NAT on vEdge Router on Transport Side:

In order to provide internet resources access from local site, NAT is configured on Transport side performing both address and port translation (NAPT).

Here vEdge router is configured NAT, so vEdge router will split its traffic in to two ways or think as separate tunnel. Green Traffic will use overlay network and will traverse from one vEdge to another vEdge via usual Ipsec tunnel whereas grey traffic is redirected to vEdge NAT device and then out to public network.

To understand this lets see the dig. 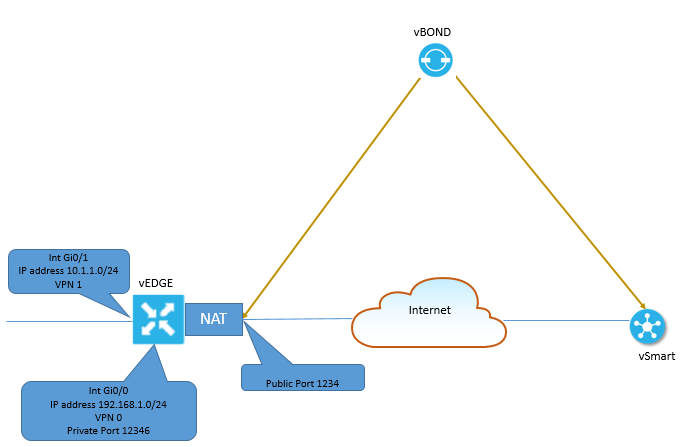 vEdge router splits traffic into two flows, one will go to Overlay network and another will go to public network.

To configure the vEdge router to act as a NAT device so that some traffic from the router can go directly to a public network, you do three things:

Once NAT is enabled on the vEdge router, data traffic affected by the centralized data policy (here, the data traffic from VPN 1) is split into two flows:

NAT on vEdge Router on Service Side:

NAT can also be configured on Service Side of routers, so that data traverse the NAT before entering the overlay tunnel. The Service Side NAT performs the NAT to mask IP address of data traffic it receives. Here dynamic NAT and 1:1 static NAT can be configured.

Here in above figure, vEdge router has one NAT interface configured on VPN 1, the interface is natpool2 with IP address 192.168.1.1 and this is IP address each packet IP address is translated to.

Now in order to configure Service Side NAT, so that traffic traverse NAT in VPN 1 before sending to transport tunnel towards destination, following things need to be done: