On a single vEdge Router, multiple Bridge domain can co-exist. Now to talk to different Bridge domain vEdge router use Integrated Routing and Bridging. This IRB is implemented by using IRB interfaces which connect bridge domain to VPN or we can say it as VPN domain.

Below dig describe all the core content mentioned above. 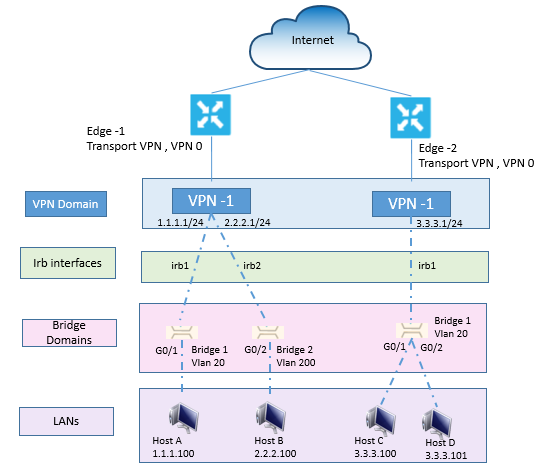 A bridge domain is said as single VLAN and all ports which are part of this VLAN are under single broadcast domain. Under a bridge domain , all bridging operations like learning, forwarding , flooding, filtering, and aging are performed to build the Ethernet Switching table ( MAC table ) for that VLAN or Bridge Domain.

Ports which are connected to WAN segments are physical gigabit interfaces on vEdge Routers are associated with a bridge domain. These interface are also said to be base interface.

Each Broadcast domain is identified with combination of bridge domain number and VLAN ID, due to which same VLAN id can be associated with different bridge Domain on single vEdge Router. And if VLAN IS are different for different Bridge Domain, then these Bridge domain can be part of same interface. Example (bridge 2, VLAN 2) and (bridge 10 VLAN 20) can include same int gi0/0 so we can treat this interface as trunk port. However (bridge 1, VLAN 2) can include interface gi0/0 or gi0/1 but these interface can’t be in (bridge 50, VLAN 2).

Cisco SD-WAN Viptela also supports 802.1Q native VLAN. If an interface is configured with native VLAN that any traffic going through it will not be tagged with same VLAN. If a host connected to an interface enabled for native VLAN, the bridge domain will receive no tagged frames.

This native VLAN is mostly used on trunk ports and this VLAN also provides backwards compatibility for devices that don’t support VLAN tagging. Let’s see an example, native VLAN allow trunk port to accept all traffic regardless of what device is connected to the port. Without native VLAN the trunk port would accept traffic from device which sent tagged traffic.

With IRB only traffic from one bridge domain to different bridge domain is sent and communicates with each other on same vEdge router and among Bridge domain on remote vEdge Routers but only restriction is that all bridge domain should be part of same VPN in overlay network.

IP address of IRB interface is subnet of the VLAN that is part of bridge domain.