APIC in ACI Fabric not only used to provision the ACI and in Policy Orchestration, but it is also provides  telemetry data and provides faults , events , statistics reported by fabric switches , Virtual Switches and integrated L4-L7 Devices.

ACI uses MIT (Management Information Tree) to represent faults, events and statistics as managed object of class faultInst or faultDelegate and all these types of Managed Objects can be queried to get valuable data.

In ACI each fault is assigned an alphanumeric string in form of FXXX which is used to uniquely identify each faults.

System faults in ACI list all faults related to ACI fabric and these faults MO is automatically created, escalated, de-escalated and deleted by system as specific conditions are detected. If same conditions are raised for multiple times, only one fault related to that particular event will be created and a counter for the recurrences of that faults is incremented.

In ACI Faults are triggered or generated based on rules, counters, crossing thresholds, task/state failure etc.

Below are some Life cycle process of faults in ACI, let’s understand that. 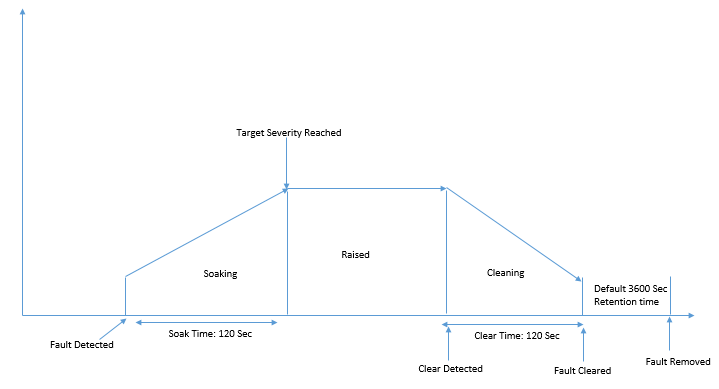 As we discussed, that each faults are mapped with some severity, below are some severity levels defined in ACI

Below are some faults commands used in ACI on NX-OS 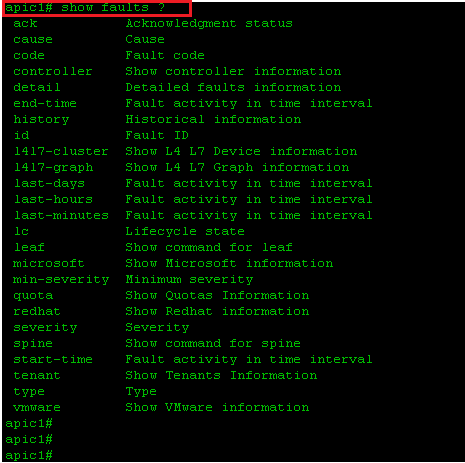 ACI collects the network data and then correlates it, analyze it and provides a health score based on it on real time basis.

Range of health score is between 0 % to 100%.  In ideal situation, health score of a healthy and well function ACI fabric score should be 100%. These Health score can be easily found and seen on ACI GUI.

Fabric Health in APIC can be seen as System | Dashboard, here you can see health score of all system Hardware, Tenants, Objects in ACI.

When a health score of any objects is reduced by system, its related fault are generated. All Health scores are instantiated from healthInst class in MIT and can be extracted via REST API.

If you want to see the health score of an object, go to Tenants | Application Profile | EPG, on right side of work pane, click on health tab as shown in below figure.

Below are some commands used in CLI mode?

To view the health of a tenant

To view the health of a bridge domain within a tenant

To view the health of a leaf

Also, you can query health scores through the REST API. The following example is a REST query to the fabric that returns the health score for a tenant named DCLESSONS

There are some ACI internal protocol like SNMP, Syslog, Net flow which are used for ACI Internal Monitoring.