Below diagram defines the relationship between EPGs and contracts.

In above figure, the WEB EPG is consuming the contracts whereas APP EPG is providing the same Contracts. Similarly the DB EPG provides the separate contracts that APP EPG consumes.

Contracts have following use or goals in ACI:

Below figure shows how contracts are configured between EPGs

Contracts are just like security ACL that is configured between EPGs. Forwarding of traffic between endpoints is based on routing as defined by VRF configuration and BD, whereas endpoints communication between EPGs depends upon filtering rules defines by contracts.

Below figure defines the above said statements. 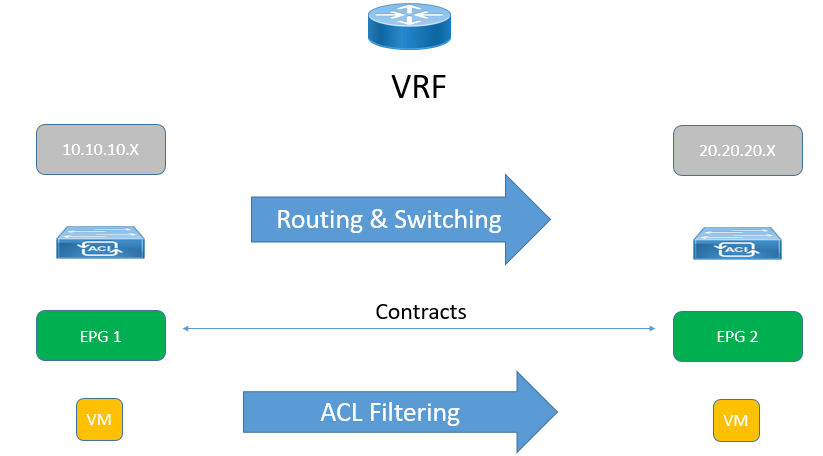 Filters are rules which includes fields such as source Port, Dest Port, Source IP, Dest IP, Protocol types which are then further attached to contracts that defines communication between EPS in fabric. A filter can contain more than one rules. A subject is a construct contained within contracts and typically referenced a filter.

Contracts that contain filters rule must have direction. Example: consumer-to-provider or provider-to-consumer

In Contracts rule don’t include IP address because traffic is filtered based on EPG definition.

Below are Some Configuration items that are used while creating Contracts.

Two types of policy enforcements in a VRF instance are available for EPGs with a contract preferred group configured:

How Contracts works in ACI

Service Graph uses the Contrast to stitch the Traffic between two EPG with a service node in between.

When an EPG is created, it is represented by a numeric value called as Policy Control tag or PCTag and also as soon as any VRF is created, APIC assigns a scope or Segment ID, as shown in below figure

Source EPG is assigned a PCTag and is represented by sClass, whereas destination EPG by PCTag. When a Source EPG wants to talk to destination EPG, a proper filter configuration (Permit/ Deny) and its related Contracts must be in place. As soon as Contracts are configuration is done on APIC and ACI fabric realizes the traffic matching to the EPG, It applies policies related to these EPG via these PCTags on Leaf Switch

This can be very well described in above figure where Web EPG (16387) wants to talk to Destination DB EPG (16388) under VRF Scope 2785280. Contracts related to this communication permits the traffic.

The vzAny managed object allows you to efficiently associate all EPGs in a VRF instance to one or more contracts (vzBrCP) instead of creating a separate contract object relationship for each EPG.

In the Cisco ACI fabric, EPGs can only communicate with other EPGs according to contract rules in Enforced mode. A relationship between an EPG and a contract specifies whether the EPG provides the communications defined by the contract rules, consumes them, or both.

The vzAny contract consumes less TCAM memory of fabric physical infrastructure and is the most efficient way of applying security policies in ACI. TCAM entries are generally specific to each EPG pair. In other words, even if the same contract is reused, new TCAM entries are installed for every EPG pair group that requires restrictive communication.

When a contracts are configured, there are two options which are typically selected by default.

The below figure defines the relationship of communication between EPGs, where EPG-1 is consumer and EPG-2 is provider and EPG-1 wants to talk to EPG-2 on destination port 80.

But as per configuration, it is not correct, because provider (EPG-2) would generate traffic from port 80 and not to port 80.