There are different modes of deploying L4-L7 devices together with service graph.

Transparent Mode: In this L4-L7 device bridge the traffic between two bridge domains and in ACI it’s called as go-through mode.

Routed Mode: In this L4-L7 device is used for routing the traffic between two bridge domains and in ACI is it called as go-to-mode

One Arm Mode: In the L4-L7 device is connected to fabric via single interface over dedicated bridge domains.

Two Arm Mode: In this mode , a Layer 4-7 devices like LB is located on dedicated BD with two interfaces.

Policy Based Redirect (PBR): L4-L7 device is deployed in separate BD and client and server can redirect the traffic based on protocol and port number.

Firewall as Default gateway for clients and Server (Routed Mode)

In this mode, the Clients and server will point to Firewall as default gateway. In this mode, we need to configure BD in L2 mode that means BD with no subnets in same VRF.

Below Figure recommends some setting in BD and this type of design is very much used in POC or in LAB. 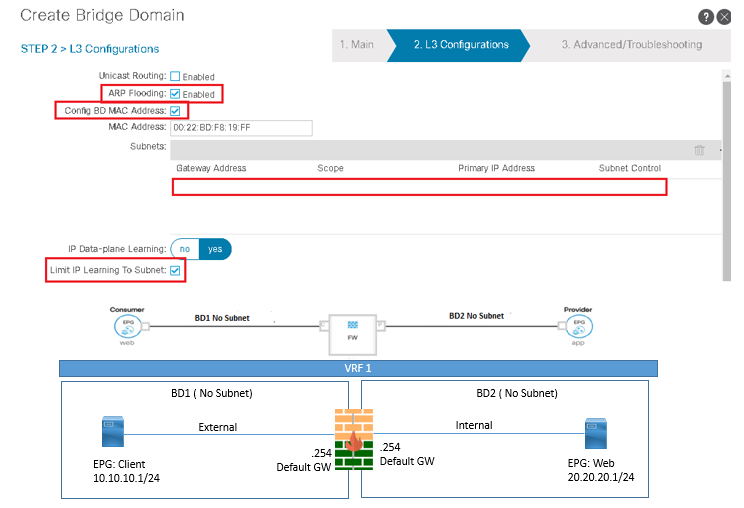 In this mode, one leg of firewall will be towards client side, and will be a part of L3 BD with a configured Subnet. In this Mode, NAT must be configured on the External Interface of FW, because ACI leafs have no information about server subnet behind firewall and hence it will not advertise via L3Out towards Client side. 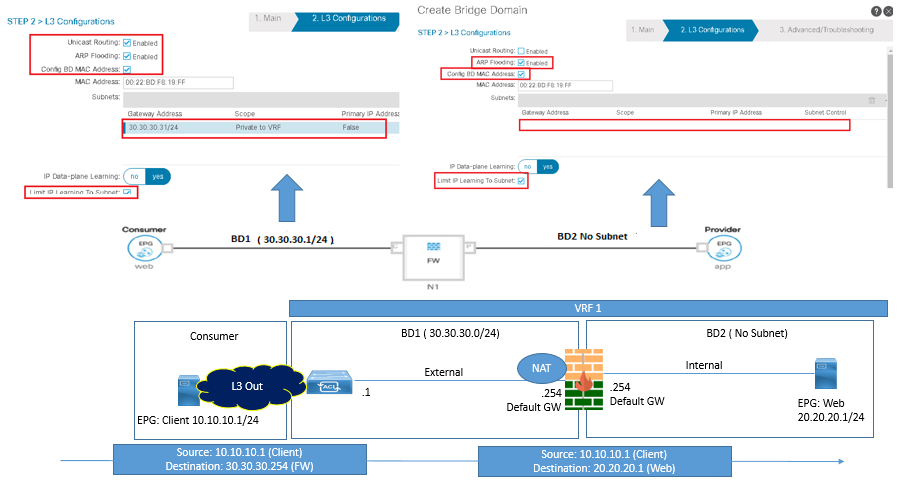 This scenarios can also be configured without NAT. In order to achieve this, you need to route peer firewall with ACI Leaf, as shown in below figure. By doing this you can advertise the server subnet out towards client side. 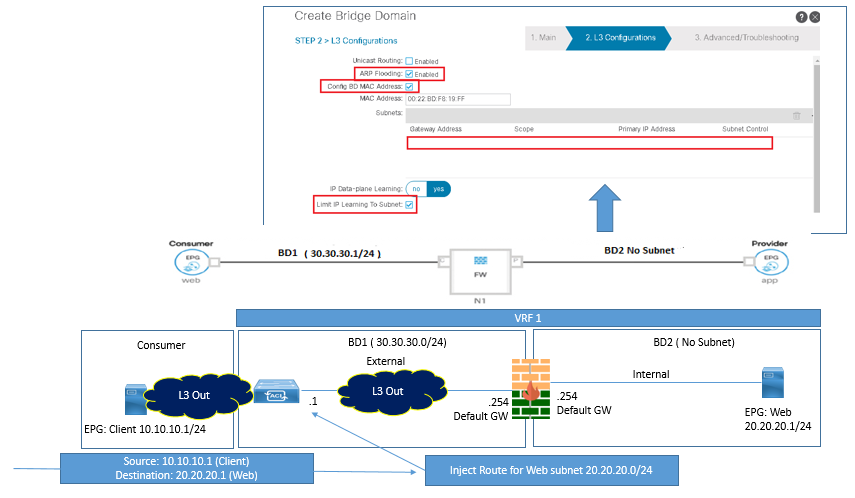 Firewall are generally deployed in Network via Routed mode. When a BD is configured in L3 Mode and have a Subnet, in that case, clients will not be able to use firewall address as next Hop.  The endpoints will use pervasive gateway subnet as its default gateway where as a firewall consumes one of the IP address in that subnet.

ACI service graph supports route peering with FW. Traffic will flow via firewall which performs state full inspection and forward the traffic towards destination endpoints as shown in below figure

In transparent mode or bridge mode, Firewall behaves as a Layer 2 device, this can be understood by two example as in figure below: 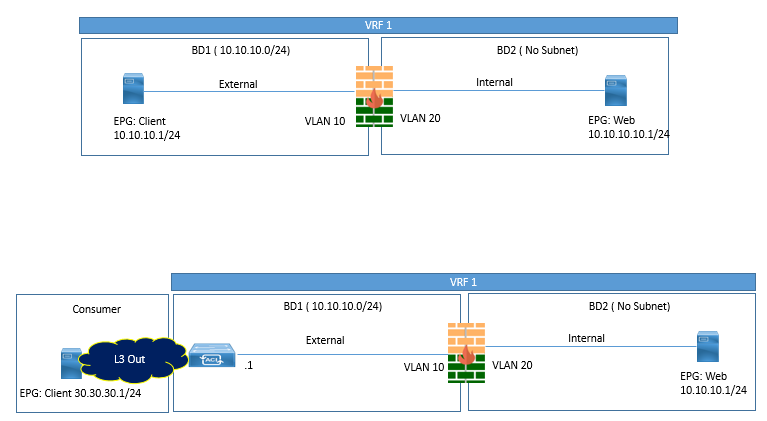 Service Graph with ADC (One Arm mode with S-NAT)

When Service graph is configured with ADC in one arm mode, we need to configure Source NAT on ADC. When we so, the return traffic will come to ADC only. If you still want to avoid Source NAT, you need to use PBR explained later in other sections.

In this mode, BD do not need to have subnets unless you want Dynamic attach Endpoint feature provided by Service graph. By the way this feature gives you capability to dynamically attach an endpoint as part of your server pool as soon as endpoint is learned by fabric. 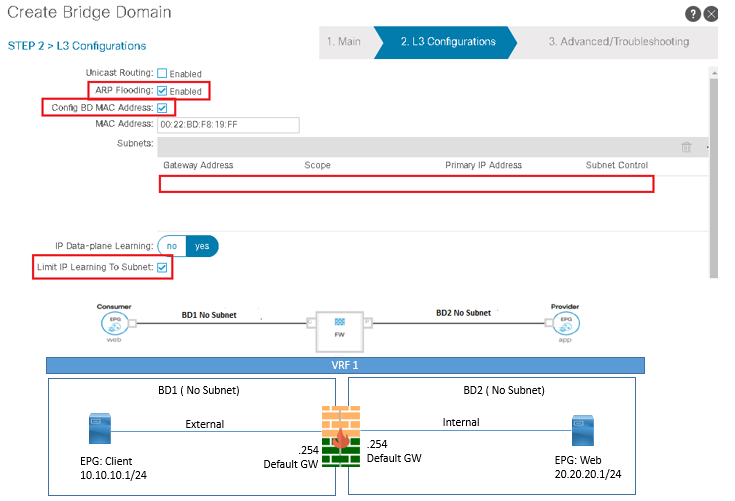 In this Mode, ADC can be your server default gateway else you need to enable SNAT on ADC. Firewall node till needs NAT as ACI leaf does not know about web server VIP behind FW.

In this mode, ADC can be your server default gateway else you need to enable SNAT on ADC. Firewall will not need NAT because its route peering with ACI leaf that will reach the VIP behind the FW through regular routing.

IPS can be integrated with ACI via Service Graph in Un-Managed Mode only because, till the time of writing there is no device package available for Managed Mode Service Node for IPS.

When we design the BD o for L4-L7 deployment, we generally considers two BD, one for Outside and one BD for inside.

Now if you want to use the graph with redirect model, then you need to define one or Two BD on which this L4-L7 device will connect and must have data-plane learning disabled and GARP detection enabled. These BD will not be used to connect the endpoints.

Below figure will demonstrate, as Service Graph example showing on which BD Cisco ACI performs Layer 2 and Layer 3 Forwarding.

In this scenario, you should enable Limit IP learning on BD1, else mapping DB can learn the IP address of endpoints from BD3, as if they were on BD1.