It is the fast, petabyte-scale data warehouse service which is designed for OLAP scenarios and is mostly used in high performance analysis and reporting of large datasets.

It gives you fast querying capabilities over structured data using standard SQL commands. It can connect well with ODBC and JDBC which further helps to integrates with various data loading, reporting, datamining, and analytics tool.

A cluster is composed of a leader node and one or more compute nodes. A clients interacts directly with leader nodes and compute nodes are transparent to external applications.

Amazon RedShifts supports Six different nodes types and each can be of different CPU, memory and Storage and which are further grouped in to Dense compute or Dense Storage class. 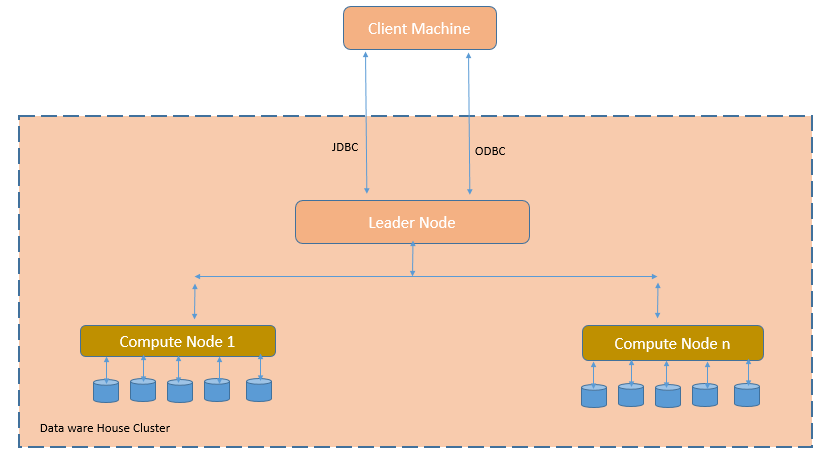 The disk storage for a compute node is divided into a number of slices. The number of slices per node depends on the node size of the cluster and typically varies between 2 and 16. The nodes all participate in parallel query execution, working on data that is distributed as evenly as possible across the slices.

You can increase query performance by adding multiple nodes to a cluster. When you submit a query, Amazon Redshift distributes and executes the query in parallel across all of a cluster’s compute nodes. Amazon Redshift also spreads your table data across all compute nodes in a cluster based on a distribution strategy that you specify. This partitioning of data across multiple compute resources allows you to achieve high levels of performance.

Amazon Redshift allows you to resize a cluster to add storage and compute capacity over time as your needs evolve. You can also change the node type of a cluster and keep the overall size the same. Whenever you perform a resize operation, Amazon Redshift will create a new cluster and migrate data from the old cluster to the new one. During a resize operation, the database will become read-only until the operation is finished.

Amazon Redshift supports one or more database and each database contains many tables which has rows and column and on which data is kept. CRETATE TABLE command is used to create table.

Data compression is one of the main feature of Amazon RedShift. When we load data for first time in to empty table, Amazon RedShift automatically sample data and select the best compression techniques for each column or you can specifically mention encoding scheme on per column basis when we issue CREATE TABLE command.

One of the primary decisions when creating a table in Amazon Redshift is how to distribute the records across the nodes and slices in a cluster. You can configure the distribution style of a table to give Amazon Redshift hints as to how the data should be partitioned to best meet your query patterns. When you run a query, the optimizer shifts the rows to the compute nodes as needed to perform any joins and aggregates.

When creating a table, you can choose between one of three distribution styles: EVEN, KEY, or ALL.

Amazon Redshift supports standard SQL commands like INSERT and UPDATE to create and modify records in a table. For bulk operations, however, Amazon Redshift provides the COPY command as a much more efficient alternative than repeatedly calling INSERT.

When loading data from Amazon S3, the COPY command can read from multiple files at the same time. Amazon Redshift can distribute the workload to the nodes and perform the load process in parallel. Instead of having one single large file with your data, you can enable parallel processing by having a cluster with multiple nodes and multiple input files.

After each bulk data load that modifies a significant amount of data, you will need to perform a VACUUM command to reorganize your data and reclaim space after deletes. It is also recommended to run an ANALYZE command to update table statistics.