If any of the ESXi hosts in the transport zone did not have access to the VLAN backed dvPortgroup, there would be no way to configure the VLAN LIF for the logical router copy in that ESXi host.

Let’s do some packet walks to see what happens when the ESXi hosts running a copy of the same logical router send and respond to ARP requests over VLAN LIFs. 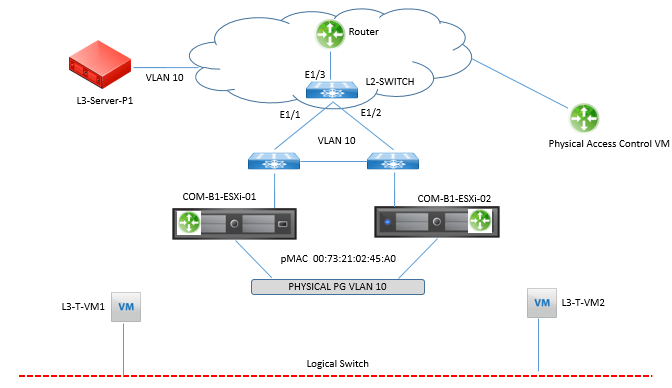 Above figure shows a logical router named Physical Access that has a VLAN LIF in dvPortgroup Physical-PG and the following configurations:

Step 2. Physical Access, in COM-B1-ESXi01, receives the frame, does a routing table lookup, and determines the egress interface to be the VLAN LIF.

Step 5. L2-SWITCH forwards the frame out of port 1/3 as shown in below figure 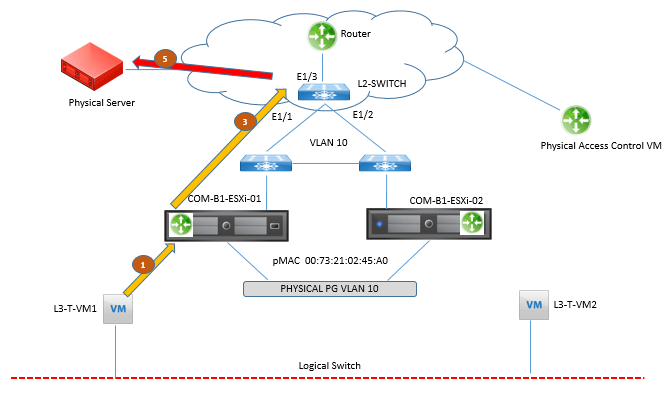 Step 7. Physical Access, in COM-B1-ESXi02, receives the frame, does a routing table lookup, and determines the egress interface to be the VLAN LIF.

Do you see the problem? L2-SWITCH sees the same vMAC bouncing back and forth between ports 1/1 and 1/2 and this is called a MAC flap, and it is BAD. MAC flaps can cause Layer 2 switches to start flooding frames. In this packet walk we just concluded, only L2-SWITCH experienced the MAC flap, but in practice, the MAC flap may be experienced by many of the physical switches in the same Layer 2 domain, including the Top of Rack switches.