Management Plane are those who are responsible for management traffic of any device .It helps in configuration and management of any network device. Management plane instruct control plane, to enable control plane to provide support for data plane traffic.

When RIB is populated, the content of RIB is copied to FIB table which is used by Network device to forward traffic, with the help of data plane any network device send the traffic at exit interface after consultation of FIB.

NSX Architecture is also composed of the three above planes, the following are the NSX main components which are based on three planes and are well shown in below figure: 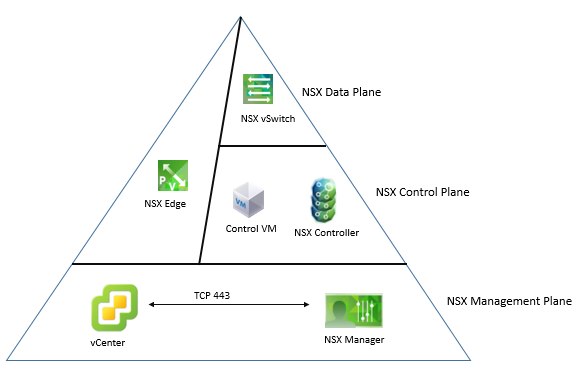 The component of NSX are:

NSX manager is in Management plane of NSX. In NSX vCenter communicates with NSX manager via HTTPS (SSL, TCP Port 443).

It is present in NSX Data plane, and is integrated in kernel code of ESXi host. It is used to handle logical switch, Distributed Logical Router, and Distributed Firewall. This switches receives the Layer 2 and Layer 3 control plane information from NSX controller and also receives the security information directly from NSX Manager.

It is the virtual appliance used to provide service like IPSEC VPN, NAT, and Load Balancing as these service are not available to NSX vSwitch. This appliance work in Layer 2, Layer 3 and Layer 4 state full firewall and it never communicated with NSX Controller.

Whatever configuration needs to be done in NSX Domain is done by NSX Manager and then it contact all other component to apply and execute those configuration.

NSX Manager can be deployed via OVA file by vSphere Web Client provide by VMWare and it requires following system configuration:

It is recommended that NSX manager should always be deployed in cluster which is configured with DRS and HA.

NSX verification can be done by two method:

A single NSX Manager will always communicates with Single vSphere and vice versa, this is also called as Standalone mode, however if you want to do cross vCenter NSX, vCenter version must be 6.0 or higher.

The following option need to be configured while configuration of NSX Manager on Manage Appliance Setting:

With Cross vCenter NSX, we can use two or more NSX manager and up to 8 , and each one is associated with its own vCenter , centrally managed and exchanging Management Plane information with each other.

In this method, one of the NSX Manager is configured as primary and rest all are manually configured as secondary. Cross vCenter NSX integration helps to extend some NSX feature among multiple environment manages by separate vCenter but maintains single point of management via primary NSX Manager.

Following are the responsibilities of Primary NSX Manager:

In case, Primary NSX manager is unavailable, any secondary NSX Manager can be manually premed to primary.