IPSEC VPN is the Method to allow secure and reliable between sites or users over untrusted medium like Internet. IPSEC provide following types of security features:

To achieve above feature IPSEC uses various types of Authentication, Encryption protocols which should be negotiated before IPSEC tunnel are created and once IPSEC tunnels are created between peer, by using these above protocols , data is encrypted and sent to destination securely.

All these process is handled by a process called IKE (Internet KEY Exchange) and it has two phase.

Below figure demonstrate the packet walk on site to site VPN and then we will see how IEK phases happens:

Traffic from user-X toward the web server goes like this:

1.The Site - X router sends an IKE security proposal to the Edge. This traffic is unprotected.The proposal includes the following:

Both sides must have a matching IPsec VPN policy; otherwise IKE Phase 2 will fail and no IPsec tunnel will be created.The NSX Edge can be deployed to create site-site IPsec VPNs with another Edge or another VPN entity, whether the other entity is physical or virtual. The NSX Edge can be placed behind another Edge doing NAT.  Below shows the list of features supported by the NSX Edge for IPsec VPN. 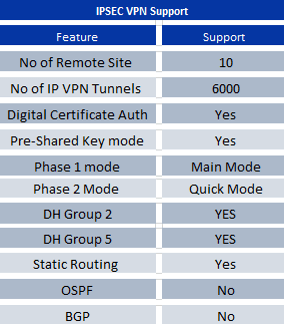