NSX manager is responsible for managing management plane of these logical switches whereas each ESXi owns its own data plane. NSX Controller or Universal NSX controller handles mostly control plane of logical switches.

Each ESXi host contains the local copies of MAC table per logical switch and contains the following information:

If there is no activity of any remote VM for more than 5 mins, MAC address of that VM is flushed out.  Logical switch learn the VM MAC from vmx file of the VM, but this default behavior can be changed.

These logical switch can be represented at ESXi host by a dvPortgroup in vDS which is assigned to each NSX cluster during preparation of logical network. Each vCenter can support 10000 dvPortgroup so maximum number of logical switches (global and universal) can also be 10000 which can be deployed in NSX domain.

As soon as the NSX controller has been assigned for particular VNI or logical switch, it has principal copy of three table:

A VTEP table contains list of all VTEP IP that have atleast one Powered ON VM. A VTEP IP is the IP of VXLAN VMkernal port which was assigned during host configuration. ESXI host populates the VTEP table when following action is done for any VM

When these above action happens for any VM, ESXi host running VM, sends the request to responsible NSX Controller to add this VTEP to the VTEP table.

Any VTEP will be removed from VTEP table of NSX Controller when following action is done for last VM on that ESXi host.

NSX Controller sends the copy of VTEP table to all ESXi host, whenever any VTEP table is updated (VTEP is added or removed).

Any VTEP table has following five fields, out of which first four entries are provided to NSX controller by ESXi host.

How VTEP table is populated:

This Section assumes that Replication mode for logical switches is configured to unicast or Hybrid.

Below diagram states that there are two ESXi host, with VNI 5555 configured and two VM are connected to this same VNI or logical switch.

Once these information is added to VTEP table, NSX Controller will send this table to ESXi host, that is ESXi-A.

Now let’s suppose that VM on ESXi-B is also powered on and same process happens as discussed above, and NSX Controller will now send both VTEP IP information in VTEP table to both ESXi Host for VNI 5555.

How VTEP table is updated:

Now below figure states the current state of NSX environment,

As soon as NSX Controller will receive this information, it will remove the ESXi-A VTEP from VTEP table and will send the VTEP table copy to ESXi-B as it has still one VM powered ON.

The Logical switch uses the vmx file of powered ON VM to learn the MAC address of VM and put it in MAC address table, this table is locally significant to ESXi host and two ESXi host with same VNI will not synchronize MAC table to each other.

Now when any vMotion occurs for any VM from one ESXi host to another ESXi Host, following action happens: 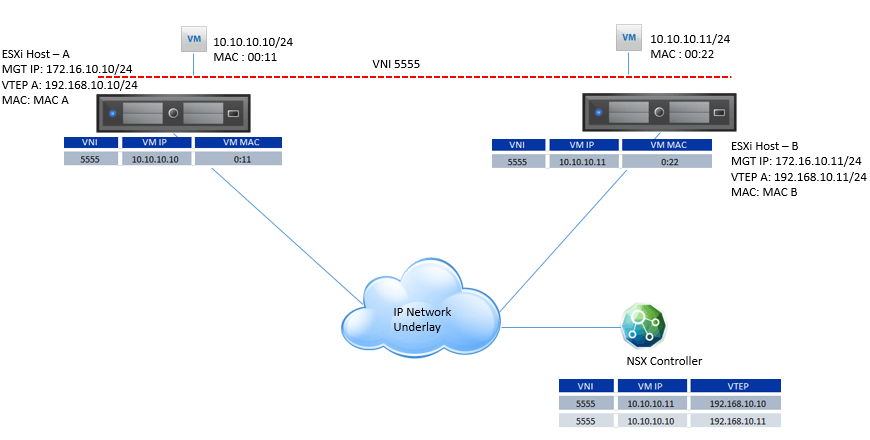 If the NSX Controller has its information ,  it will reply back to requestor ESXi host logical switch and upon receipt , it will add the MAC address in its local Mac address table with dead timer of 200 sec.

Now in Multicast replication mode, if the logical switch does not have MAC address in its MAC address table , it will multicast the packet  by using VXLAN encapsulation with destination IP ( Multicast address for that VNI )

All VTEP that receives the Multicast VXLAN frame, will decapsulate it and send a copy of the BUM to every powered on VM connected to logical switch.

For any logical switch which is configured with multicast replication mode, NSX controller will not keep a VTEP table, ARP table and MAC table.

Multicast Group specific to VNI is configured during segment ID creation, where we provide pool of VNI along with option to enable multicast addressing. If the Number of VNI pool is greater than Pool of multicast, NSX manager will map multiple VNI to same Multicast address.

For Multicast to work, PIM and IGMP must be configured in the underlay.

Disadvantage: With every VM is powered ON, Multicast BUM is created and is processed by every ESXi host on same VNI.

When Multicast replication mode is used, NSX controller does not have VTEP, ARP and MAC table for that VNI. Now Following are the case when packet will use unicast mode to replicate if any of the condition becomes true:

Disadvantage of this mode is that if VTEP table is very large, source VTEP have to send the large number of unicast copies to VTEP (One copy to One VTEP a per VTEP table).