The customer can define its subnets in the VPC, provide Internet access within it, and grant connectivity for the resources from VPC to on premise data centres or to other locations (may that be another AWS VPC or another cloud provider).

Until recently, AWS did not allow to connect a VPC from one region to a VPC from another using the VPC Peering feature. VPC Peering is a network connection between two VPCs that allows to route IPv4 and IPv6 traffic between them. Means Transitive Routing is not supported in AWS.

AWS has some unsupported VPC Peering configurations and one among them is Transitive Peering. Let’s suppose that you have VPC-A connected to VPC-B using a peering connection, and you have another peering connection between VPC-A and VPC-C.

There is no direct peering connection between VPC-B and VPC-C. Although both are connected to VPC-A, they cannot use VPC-A to communicate with each other. 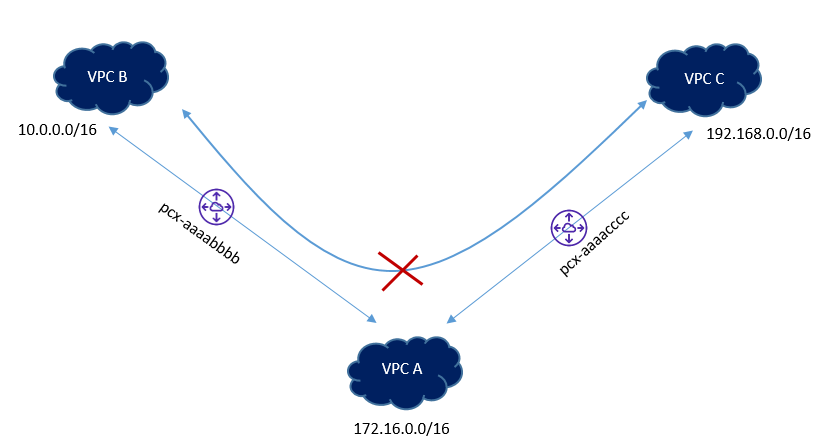 A transit VPC simplifies network management and minimizes the number of connections between VPCs. A full-mesh peering between four VPCs will require N*(N-1)/2 links (where N is the number of the VPCs), which in this case is six, in order to communicate to each other.

Imagine what this would mean if there are 100 VPCs. Not to mention the time and costs involved to deploy such a solution.

Even though, for any external connectivity to VPC and from that VPC to another VPC, this rules prevails, in order to overcome this issue, we can better use the Proxies routers, EC2 VPN, NAT instances, and when these devices receive packets and forwards it to next hop, it will change the source Address of the packet and this behavior requires disabling the Source/Destination check.

Below are some transitive Routing Examples: