Azure NSG is used to filter Network traffic to and from Azure resources in an Azure Virtual Network. NSG contains the security rules that is used to allow or deny any traffic from different Azure Resources.

A NSG contains Zero or as many as rules as we need within Azure Subscription limit.

Below are some fields that are used to create Rules:

A Flow record is created for existing connections and communication is allowed or denied based on connection state of the flow record. Flow records are stateful in Nature.

If Inbound port is allowed over a port, it is not necessary to specify an outbound security rule to respond to traffic over the port.

Azure has following default rules in each network security group you create. Below are default security rules:

You cannot remove default rules, but you can override them by creating rules with higher Priorities.

Augmented Security Rules are security definition for Virtual networks, allowing you to define larger and complex network security policies with fewer rules. In this you can combine multiple ports and multiple explicit IP address and ranges in to a single, easy understood rule.

It represents a group of IP address prefixes from a given Azure Service. It helps to Minimize the complexity of frequent updates on Network Security rules.

Below is the discussed Scenarios, which we will use to discuss – How NSG deployed to allow network traffic to and from Internet over TCP port 80. 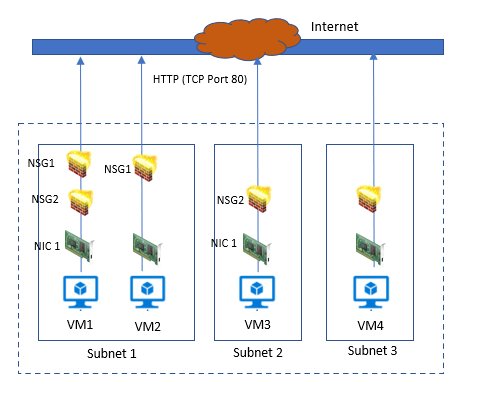 For Inbound traffic, Azure process the rules in NSG associated to subnet first if exists and then rules in NSG to Network Interface, if there is one.

For VM1: Rules in NSG1 are processed first as it is associated to subnet1. If the traffic is allowed on TCP port 80, it will pass the traffic else traffic will be denied by default Security rule: DenyAllInbound and is never evaluated by NSG2. Once traffic is passed by NSG1, Traffic will hit to NSG2 rules and the rules are present in NSG2, it will allow inbound traffic to pass.

For VM2:  The rules in NSG1 are processed because VM2 is also in Subnet1. Since VM2 doesn't have a network security group associated to its network interface, it receives all traffic allowed through NSG1 or is denied all traffic denied by NSG1. Traffic is either allowed or denied to all resources in the same subnet when a network security group is associated to a subnet.

For VM3: Since there's no network security group associated to Subnet2, traffic is allowed into the subnet and processed by NSG2, because NSG2 is associated to the network interface attached to VM3.

For VM4: All network traffic is allowed from VM4, because a network security group isn't associated to the network interface attached to the virtual machine, or to Subnet3.

security rules in an NSG associated to a subnet can affect connectivity between VMs within it. By default, virtual machines in the same subnet can communicate based on a default NSG rule allowing intra-subnet traffic. If a rule is added to *NSG1 that denies all inbound and outbound traffic, VM1 and VM2 will no longer be able to communicate with each other.