Thera are two types of storage option mostly available to provide storage solution to compute nodes and further to instances.

This type of storage means, even though the VM is powered off the storage and its data will be available. Persistent storage is divided in to three options:

What is object storage:

In object storage, data is stored in from of objects via RESTful HTTP API. By this type of storage, even though nodes fails, data are not lost and these type of storage can be scaled infinitely.

Swift is the Object storage service provided by Open Stack and was developed by joint efforts of NASA and Rack Space.

There are following benefits of using Swift as object storage solution:

Swift Architecture is distributed in nature, and it also prevent the single point of failure and can be scaled horizontally. There are following Swift components as discussed below:

In swift object storage solution, when we need to search, retrieve and index any data on object storage device, Meta data is used. These metadata are stored with object itself in key/value pairs.

How Swift is physically designed:

By default, a swift cluster storage has design considers the replica if three. Once data is written it si spread across other two redundant replicas.

Swifts isolates failures, and to achieve this, swift defines the new hierarchy that helps abstract the logical organization of data from physical one.

Region: As Swift is a geographically distributed environment, data can be sent to multiple nodes that are placed in to different regions. Swift to support the read/write function, it favor the data that are closer to read and while write, data is written locally and then is transferred to rest of regions.

Storage nodes: Storage server are referred as Storage nodes and a group of storage nodes froms the cluster that runs the swift processes and stores the account, containers and object data and its associated Meta data.

Storage Device: It is smallest unit of storage in swift data stack. It can be internal storage node device or connected via external link to collection of disk in drive enclosure. 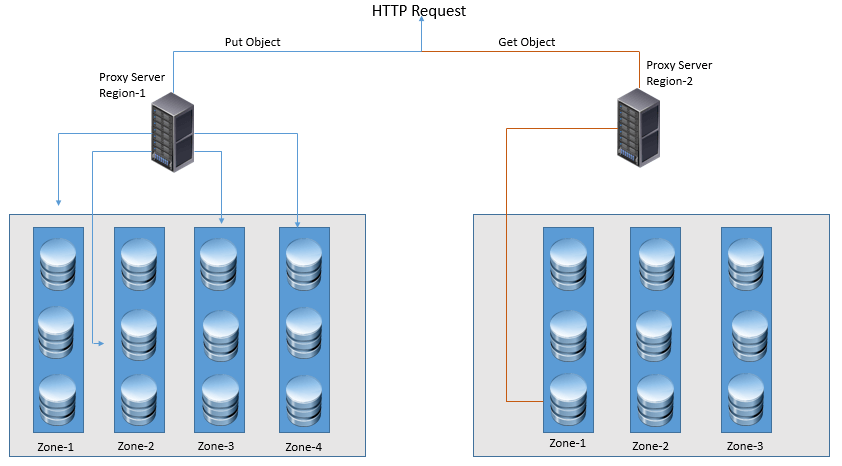 In Swift the logical layout of object data is mapped to a path based on the account, container and object hierarchy. In the context of OpenStack, the account maps to the tenant. Each tenant can have multiple containers, which are like folders in the filesystem, and finally the object belongs to a container just like a file belongs to a folder in convention filesystem based storage.