OpenStack compute nodes are those where Virtual machines are created and installed and user uses them.

Compute Services in OpenStack are made up of multiple services working together which takes request, launch and manage the virtual machine. Following are the compute services that runs on OpenStack compute nodes.

Nova-api: This service interacts with User API calls to manage compute instances. It communicates with other compute services via message bus.

Nova-scheduler:  This services listen request for new instances on message bus and then selects the best compute node for virtual machine.

Nova-compute: This service starts and terminates the virtual machine , and this service runs on compute nodes and listen this request on message bus.

Nova-conductor: When any instance requires access to databases , it uses nova-conductor , which provides compute call to access database.

Most of the nova-compute node runs KVM as hypervisor, as it is best suited for workloads that are using libvirt. KVM is the default hypervisor for Open Stack you can check this from /etc/nova/nova.conf

Docker Container provides the isolated user space to host any application. The containers uses the same kernel and same host Operating systems. Containers are providing an encapsulation mechanism that captures the user space configuration and dependencies of an application. This encapsulated application runtime environment can be packaged into portable images. The advantage of this approach is that an application can be delivered along with its dependency and configuration as a self-contained image. 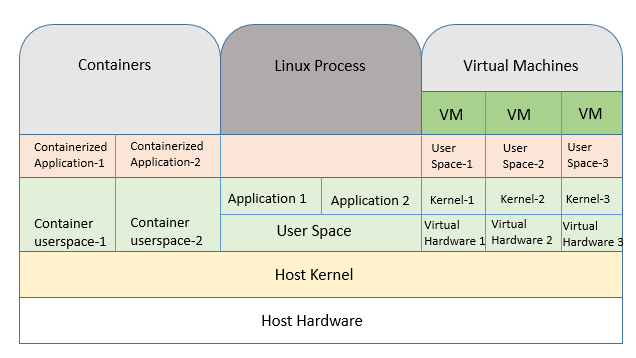 With the help of Docker, any enterprise can host or deploy the application in self-sufficient containers. Docker has large number of containers than is managed on single machine. Dockers provide containers that are not replacement of virtual machine but its containers are very fast and very helpful to deploy any application.

Docker also saves the state of container as an image that can be shared through central image registry which can be shared across different cloud environment.

AZ can be configured by following commands while editing the file:

And update default_availability_zone value. Once it is updated compute node will be restarted.

When hosts or several compute nodes are aggregated or grouped which provide similar feature and services we say as host aggregation. Host Aggregate can be created by attaching set of metadata to computed nodes.

As example: if we need VM with high CPU and RAM , then we can group the Compute nodes with High RAM and CPU and end user can create VM on that compute host aggregates.

We can try to understand the workload segregation by following example:

Lets suppose you want to launch or create more than one virtual machine and also you want to place them on same compute nodes. Or you want your application on VM with high availability mode. In this you can use workload segregation.

Use the Nova client to create server groups. The server group can be created with an affinity or anti-affinity-based policy as shown here:

To start the virtual machines associated with a server group, use the --hint group=svr-grp1-uuid command with the Nova client:

This will make sure that the virtual machines, vm1 and vm2, are placed in the same compute node.

There are other storage option available for compute nodes:

When the hard disk of instance are kept externally and are not local to compute nodes, we say it as External storage.

It has many advantages:

The filter scheduler uses a pluggable list of filters and weights to calculate the best compute node to host an instance. Changing the list of filters or weights can change the scheduler behavior. Setting the value of scheduler_default_filters can do this.