VTEP redundancy is achieved by  Cisco Nexus 9300 platform switches by using a pair of virtual PortChannel (vPC) switches to work or function as a logical VTEP device and sharing an anycast VTEP address.

The vPC switches use vPC concept for redundant host connectivity while individually running Layer 3 protocols with the upstream devices or switches in the underlay network. Both VTEP will join the multicast group for the same VXLAN VNI and use the same anycast VTEP address as the source to send VXLAN encapsulated packets. To the devices in the underlay network, including the multicast rendezvous point and the remote VTEP devices, the two vPC VTEP switches appear to be one logical VTEP entity.

Below is the figure and will be used for LAB 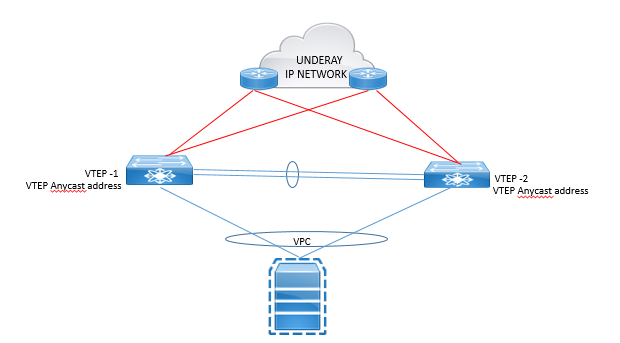 To configure vPC VTEP, use the following steps:

Step2: Configure a loopback interface with/32 as the secondary address.

The primary address configured on a loopback interface will likely be used as the router ID by network routing protocols, such as OSPF and Border Gateway Protocol (BGP). In this case as both switches are on vPC, two switches can’t have the identical primary loopback address so vPC VTEP uses an identical secondary address configured on the loopback interface between the two switches as the anycast VTEP address. Some examples are shown here.