Transformation from Legacy Network to SDN

Transformation from Legacy Network to SDN

As we see the traditional network, each network device like router and switch has its control plane and data plane, and each device runs control software like operating system which includes Routing and Switching features like BGP, OSPF, EIGRP, Spanning-Tree, LACP etc. These end device runs these protocol individually to build network and forward traffic.

These integration between Software and Hardware limits the scalability of the network because each device do not have full view of network.

Following are the core features of SDN, these are discussed below.

Programmable Fabric: SDN makes the fabric programmable which means it can direct the traffic, Apply filters to packet, determine the least cost path etc. All these can be done by centralized controller.

Central Monitoring and Network Discovery: As SDN controller has full view of network, it can discover all the physical link along with network devices. It can also present the map of all connected devices (host) connected to network. SDN also support monitoring and management protocol like syslog , snmp and also support API integration with third party NMS.

Following are the SDN components which are given below:

You can image the SDN controller as supervisor module (brain) of switch. 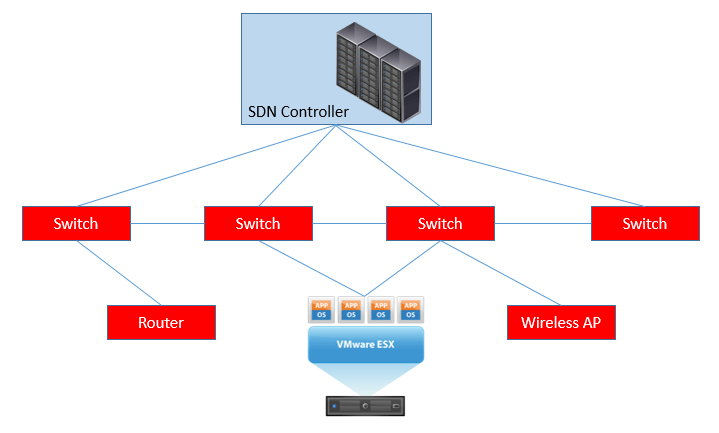 There are two main technology used by SDN controller to manage and control SDN network.

History of SDN Controllers and its protocols:

Main key element of SDN controller is to disaggregate the software and hardware and also control plane and data plane.

Open flow was the first protocol developed at Standford for SDN to manipulate data plane to optimize the data traffic, its first version 1.0 was released in December 2009. It was designed to update the flow table in a switch so that network can quickly adapt to changing requirement.

Second invent after Openflow was NOX, which was original Openflow Controller, it was developed by Nicira networks in 2009 which was further donated to SDN community. It was providing high-level API which are capable of managing and developing network control applications.

Later Nicira along with NTT and Google developed ONIX which was more suitable for large network deployment. ONIX become base of VMWARE NSX and other network virtualization platform.

In 2010 a new controller called Beacon controller was developed by developers of standford university. It is Java based open source Openflow based controller. It has been widely used in teaching, research and was base of another controller called Floodlight. Beacon was first Web-based SDN controller and only supports star topology.

After Beacon was introduced , a new successful controller Floodlight was introduced, which was created by Big Switch network, this controller has fixed various issues of Beacon , and has web-interface as well as java based GUI. It also integrates OPENSTACK by quantum plugin.

Below are some commercial SDN Controllers which are player in SDN domain.