What is Docker and it’s Benefits:

Docker is a software platform that is used to Create, Manage and Orchestrate Containers. It is a software that runs on Windows as well as Linux host. Docker helps you to develop, run and ship the applications. The Application run on Docker as Container and container uses the Kernel and OS from base host machine. SO in order to understand, Docker is a layer or software package that runs on your host machine and over Docker container runs which contains Applications.

At the time of Writing, Docker has two main Editions:

From Q1 2017, Docker version follows numbers format like YY.MM-xx for versioning scheme. Let’s say if the release comes in April 2019 than its version will be 19.04-ce for community release.

Docker has open-source project also called as Docker Project, This Project helps in providing set of tools that has Docker Daemon and Client which you can download from docker.com and install it on host machine.

This Project was officially renamed as Moby project at Docker annual conference (DockerCon) in Austin 2017. With this GitHub repo was moved from docker/docker to moby/moby and finally project got its own logo.

A docker can be installed on following platform:

Here We will see, How Docker is installed on Linux Desktop. For that you must have Ubuntu Virtual Machine with following Version:  ubuntu-16.04.6-server-amd64

Once Ubuntu VM is ready, you need to see which version needs to be installed:

We will be using Community Editions as this is free and can be used to see all possible Scenarios of Docker.

Older versions of Docker were called docker or docker-engine. If you have this in your system, please uninstall them first using the below command: 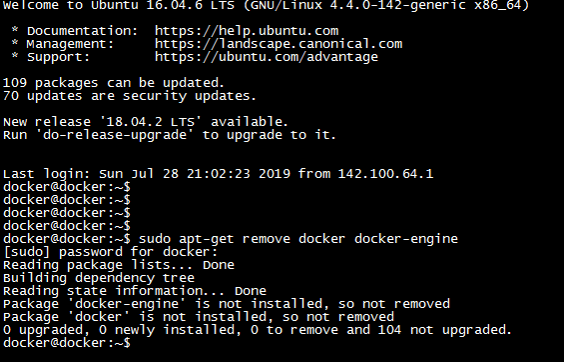 Install the linux-image-extra-*packages, which allows Docker to use the aufs storage drivers.