Software Defined Networking is the paradigm shift from Legacy Datacenter three tier architecture to next generation automated or orchestrated Environment. With this topics you will learn the basic concepts of SDN, how it is evolved from time to time and its benefits. This SDN and ODL will enables you to learn about how SDN fulfills the gaps or drawback of traditional Data Center.

SDN & ODL will help you to learn the open source controller and how to configure it, how its traffic flows and how SDN is used between white box and black box.

The Course Pedagogy will help you to learn the following concepts on SDN & ODL Section.

To understand the SDN or Software Defined Networking, we have to understand How Datacenter was evolved and what was the drawbacks of Tradition DC and How SDN overcomes on it.

At Early 1990 there was tradition of Monolithic Servers which has large numbers CPU, Propriety OS with high cost and uses more space, Power in DC. These servers were part of First generation data centers

Later at Early 2000 tradition changed to commodity servers which has few CPU and on X86 Platform , commoditized OS and One application per Server which also contribute to high cost , Power and Space but respectively lesser  than Monolithic servers. These Infrastructure were part of second generation data Centers

And in Todays scenarios third generation Data Center and  early 2005 onwards DC Servers models changes towards Virtualization where one Physical Servers host many virtual servers and each has different vCPU , RAM , OS and Application installed , Which reduces cost , space , power utilization in comparison to Monolithic and commodity servers and are very cost effective. These physical servers comes in form of rack Servers and Blade servers over which any hypervisor runs which in turn provides facility to create Virtual Servers.

As Datacenter was advanced, WAN was also developed with variety of advance technology like MPLS, IWAN, and High Speed Link which were used to provide connectivity to these Datacenters and further to sites.

With All advancement made  on Datacenter and WAN , it was still problem to meet users requirement like downloading HD Video , Multimedia , games , High Bandwidth Application Access which further failed to satisfy the needs to users.

Despite of third Generation Datacenter and advancement made on server environment and WAN connection, these Datacenter still faces some major drawbacks on following areas discussed below:

Scalability: Building high scalable Datacenter is challenges due to increasing number of users day by day. It’s become very difficult to scale UP the resources every time due to large number of increase in users day by day which has left with no addition Space in datacenter. Sufficient Power and other necessary resources availability are also challenge for DC due to Geography.

As the advancement on compute and storage were done it was required to make some advancement on Network as well. The Network engineers, Architects and users wants the ability to customize their network environment like Routing, Security , Network on demand readiness  in order to meet the requirement of users.

So to achieve this , it was required to make network programmable and doing so it make network ready on demand and meet the advancement of compute and users requirement. This advancement was done on network by a technology called SDN (Software Defined Networking).

As in traditional network each network device has two types of planes, control plane which acts as brain and contain the routing and switching information of hosts or network whereas data plane is used to forward the data. This concepts worked very well over time and as network goes complex these planes also add enormous amount of complexity in the network. Due to which any thing comes new on network, its related configuration has to be done from source to destination devices which comes on the way. This issue was also solved by SDN.

In next topic we will see what SDN is and how its benefit it to Network environment.

In previous we discussed how network lacks the programmability with traditional network, so it was decided to decouple control plane from data plane and thus to provide the centralized controller to provide the benefits of programmable network.

Now if we talk about traditional network each devices (router and switches) has application loaded to it.

The application relates to services like IPS, VOIP, and Monitoring, load balancing which has to be configured and are loaded on each router and switches individually. As traffic flows to network each devices takes the decision where to route packet based on configuration and any changes to application requires individual configuration on each device. Below figure explain this: 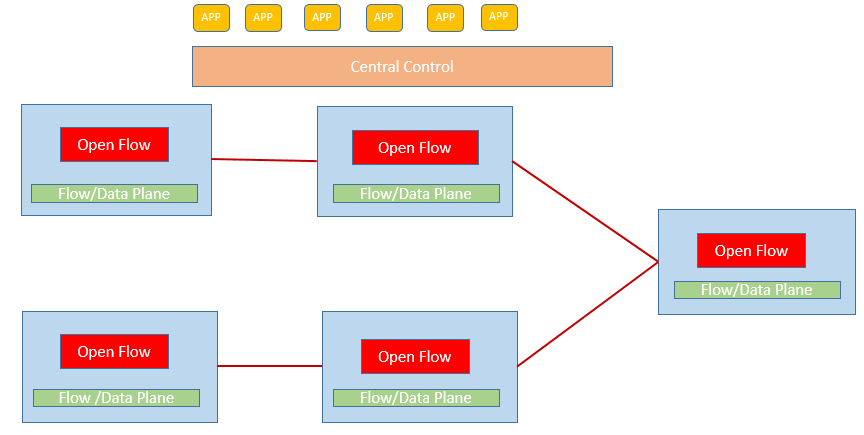 Now Centralize controller will supervise the traffic flow which distributes and manage the flow table to each switch and router.
[pms-restrict subscription_plans="1315, 1316, 1317, 1735"]
Below figure describes the logical view of the SDN. In SDN most application don’t reside on actual devices and only interface with them through controller and network appears to be one big switch or router.

Here we will discuss each and every layer of the above diagram.

Application layer: This layer includes network applications which includes VOIP application, Security Applications like firewalls, load balancing application etc, where as in traditional network these applications were handled by Router and switches. SDN helped them to offload and thus making it easier to manage. It also means that the hardware can be stripped down, saving companies a lot of money on networking gear.

Control layer:   Here control plane of the router and switch has been centralized to one controller which helps to achieve the objective of programmable network. Open Flow is the protocol which communicates with Control layer to infrastructure layer.

Infrastructure Layer: This layer has router and switches and the data. Traffic will be moved based on flow table and all the traffic flow rules are managed by central controller.