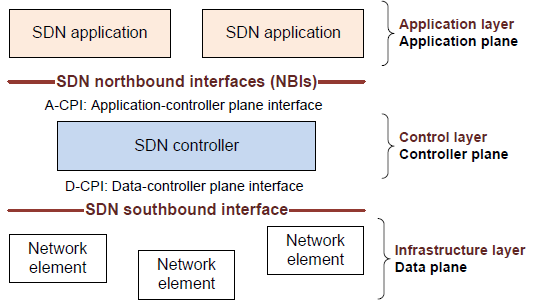 The main idea behind SDN is to separate control and data plane and to make networks agile and flexible.

SDN is a trend that is gaining importance with established vendors such as Brocade, Cisco, HP, and VMware.

We can briefly see in the later sections about the different vendors.

Let's see the timelines of SDN.

Network virtualization played an important role throughout the evolution of SDN

As we discussed earlier, the main purpose of SDN is to separate the data and control plane.

SDN architecture is built using a combination of software and hardware that separates the SDN control plane and the SDN data plane of the network.

A single device does the configuration of the entire network. This controller has the full access and observation of everything that is happening in our network.

To program the data plane, the SDN controller has to communicate with our network devices. This action is done through the southbound interface, which is a software interface, often an Application Programming Interface (API).

API: A software interface that allows an application to give access to other applications by using pre-defined functions and data structures.

Some popular southbound interfaces are:

Multiple applications can access the SDN controller via API.

The information is delivered in a common data format. The two most used data formats are: